One of the concerns that many people have about wearing dentures is the impact that it has on their facial appearance. The entire lower face can begin to sag, turning into jowls that obscure the chin and neck. Around the mouth, the lips can fold inward, creating a sunken appearance. Even the chin can begin to sag.

Now, there are some people who propose that facial exercises can help you prevent facial sagging and wrinkling caused by wearing dentures. If you want, you can watch this video where an old woman explains the anti-wrinkle exercises. It’s good for a laugh, but that’s all. The truth is that exercises won’t stop facial sagging and can actually make it worse. 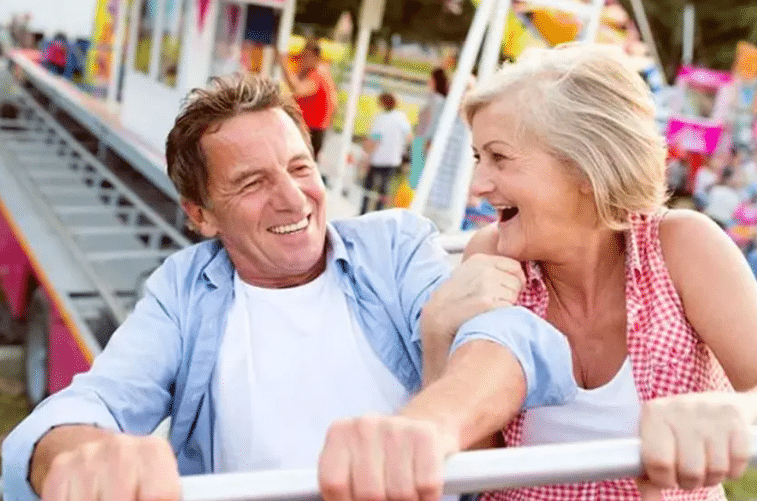 The Real Cause of a Sunken Appearance

The problem is that the sunken appearance that comes from dentures has little to do with your muscles. Sagging isn’t caused by relaxed muscles, it’s caused by tooth and bone loss.

Your face developed around a facial structure that included tall teeth and full bones. When the teeth are lost, the support structure becomes smaller, but the skin, fat, and muscles don’t. The longer you wear dentures, the worse it gets, because your body will begin to remove the bone that used to support your teeth but is now, in your body’s calculations, unnecessary.

Imagine wearing a shirt that fits you perfectly, but then you begin to shrink. Suddenly that shirt is too big. It begins to sag all over. It can bunch up in places and when you sit down it will pool in your lap, wrinkling and folding.

There are two ways to get rid of all that “excess” skin, fat, and muscle. It can be cut away, and the remainder stretched out over your facial structure. That’s what a surgical facelift does. Or you can replace the lost support structure. That’s what The Denture Fountain of Youth® does. Most dentures don’t even try to replace the full extent of tissue loss — they replace only a fraction of it because most dentists don’t know how to gauge what’s gone and they don’t want to put in too much.

Why Exercises Can Make the Situation Worse

Even though the problem isn’t sagging muscles, you might think that exercises can’t hurt. After all, won’t those muscles do a better job of supporting your skin and fat? Not really. Without anything to anchor them, those muscles won’t really be supporting your face. They’ll just be hanging themselves.

In fact, making your facial muscles bigger will just mean there’s more tissue hanging loose on your face. Stronger jaw muscles may lead to more pressure on the jawbone if you have poorly fitting dentures, which can speed the rate at which you’re losing bone. And contorting your face the way the video shows will just crease your face, creating more permanent wrinkles.

If you are looking for dentures that will help you maintain a more youthful appearance, please call (803) 781-9090 for an appointment with a Columbia, SC denture dentist at Smile Columbia Dentistry.