Will Braces Lead to Receding Gums?

Braces are a great way to straighten your teeth, which can give you a more attractive smile. However, some people are concerned that braces could also cause a negative impact on their smiles: receding gums.

Studies show that if there is a connection between braces and receding gums, it’s probably slight, and there are options to help protect your gums. 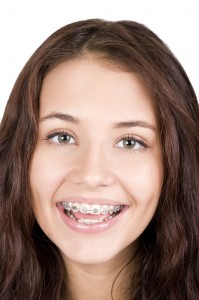 Some studies do suggest that braces can contribute to receding gums. There are two reasons that might make this happen. First, it’s harder to clean teeth with braces on. More challenging oral hygiene can lead to an increase in gum disease, which in turn leads to receding gums.

But braces might also stress your gums, leading them to detach. Some suggest that tilting movements, especially might cause your gums to detach from your teeth.

But does this really lead to receding gums? Most studies seem to say no. A 2002 study looking at orthodontic movement thought to be the riskiest for gum detachment showed that there was no effect of orthodontic treatment on the gums. This was a pretty small study, only 67 patients, but it was confirmed by a larger review of studies that also showed no increased risk of receding gums with braces.

But it’s often true in science that different studies often tease out different effects, and a 2014 study that was much larger than the 2002 study showed that there was a statistically significant risk of increased gum recession associated with braces. However, the effect was small: the average amount of gum recession was about half a millimeter. For comparison, mild gum disease is when you have about three millimeters of gum recession.

However, even a small amount of receding gums might not be acceptable to you, and that’s good, because the healthier you keep your gums, the better your teeth will last you through your life. The good news is: you don’t have to suffer any gum recession with braces.

It doesn’t seem that the movement of teeth really is a major cause of receding gums. Instead, it’s likely that hygiene is the primary cause. To keep your gums healthy while wearing braces, make sure you follow all the instructions to clean them properly. We might also have you come in more often for cleanings at our office so that you can prevent gum disease.

We also offer Invisalign, which is completely removable and makes it easier to clean your teeth. Many people will find this is an easier solution for straightening your teeth, but it’s not ideal for everyone.

If you are looking to straighten your teeth and want to learn the best way to protect your gums, please call (803) 781-9090 for an appointment with a Columbia, SC dentist at Smile Columbia Dentistry.

By Dr. Adam Hahn|November 12th, 2014|Braces|Comments Off on Will Braces Lead to Receding Gums?