A new discovery about ancient teeth found in China has researchers wondering where they came from. The teeth, which date from 60-120,000 years ago, do not match teeth belonging to modern humans, Neanderthals, or other known relatives, and we’re not sure if they’re the product of crossbreeding or an indicator of an entirely new species. 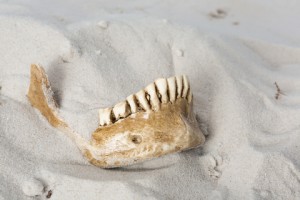 Unlike today, where all people on Earth belong to the same species, Homo sapiens, at the time these fossils date from, there were at least five hominid (humanoid) species roaming the Earth. In addition to modern humans in Africa, there were Neanderthals in Europe, Denisovians in Asia, the so-called “hobbits” of Indonesia, and a mysterious fourth species that we know very little about.

Although these teeth were discovered in 1976, it is only recently that they were analyzed in detail. But now researchers in spain looked at the teeth in detail, tracking the size and shape of the crowns and root systems, the grooves, roots, and cusps that can be used to characterize teeth as belonging to a particular species. They then compared these features with a database of more than 5000 hominid teeth, which includes samples of teeth from nearly all known species.

Researchers who described these teeth are at this time reluctant to say the teeth came from a new species. They say that the teeth might even belong to the Denisovians, who are themselves known from only two teeth and a finger bone.

Other researchers, though, want to attribute the teeth to a new species, claiming that the mixture of primitive and modern features is unprecedented and therefore likely relates to a new species. Hopefully, resolving this mystery will provide us with new insight into our origins as well as the nature of our teeth as have previous mysteries about how cavemen got cavities or when people started cooking.

If you are facing your own toothy mystery that needs the assistance of a Columbia, SC dentist, please call (803) 781-9090 today for an appointment at Smile Columbia Dentistry.