Toothy Gift Options for the Superfan on Your List

If you are looking for a really remarkable gift for the superfan on your list, consider giving the gift of teeth. Not real teeth, but fake teeth used in their favorite cult TV shows and movies. These one-of-a-kind gifts can bring people closer to the movies and shows they adore, and, even better, can represent a real surprise–nobody expects dentures for Christmas. 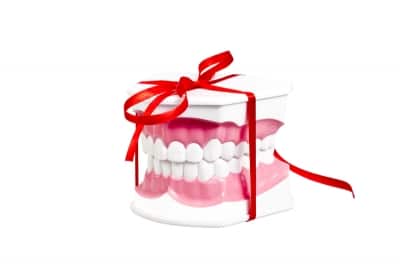 When a movie or TV show is made, thousands of props are used, and after the production is finished, many of these items are either put into storage or pass into the hands of people who worked on the production. Years later, these props can resurface, because the owner is looking to make money or clear out space for new acquisitions. And among the more commonly sold props are dentures.

Dentures are used in movies and TV shows to create special dental effects. Sometimes, as with The Wolf of Wall Street, dentures are used to create a set of large, white, perfect teeth when an actor doesn’t have them. More commonly, though, they’re used to create certain effects of misshapen or damaged teeth. For the Heroes fan, for example, there’s a set of dentures worn by Zachary Quinto (who also plays Spock in the new Star Trek movies) to create an effect of being “sandblasted” in a fourth season episode where he gets overwhelmed by his power to control the earth.

For Buffy the Vampire Slayer fans, there’s a set of dentures used to create minions’ teeth (no, not the cuddly yellow kind) from a season 5 episode. And for fans of the spinoff, Angel, there are several demon dentures available.

For Johnny Depp fans, there’s even a set of vampire dentures used in the movie Dark Shadows. Although these are casts of Depp’s actual teeth, they are painted green so they can be easily worked with in postproduction to create the scene of Depp brushing his teeth while only his toothbrush and toothpaste show in the mirror.

Want something other than dentures? Well, there are many creature teeth to choose from. Despite the spread of computer generated imagery (CGI), animatronic creatures are used in many productions, and they can be found after the production for sale. From a minotaur used in The Chronicles of Narnia to piranhas used in the Piranha 3DD, you can find a lot of toothy critters for sale.

You Pay for the Name

Many of these gifts are pricey for a gag or offbeat gift, several hundred dollars for a set of dentures, or several thousand dollars for some animatronic creatures. But one of the things that makes the props pricey is that they’re associated with specific productions. For a generic set of fake teeth that were used in lesser-known production, you can get them for under $100.

Although these fake teeth are fun, at Smile Columbia Dentistry, we mostly work with real teeth, and strive to make sure any replacement teeth like dental implants look natural and attractive. For help with your teeth, please call (803) 781-9090 for an appointment with a Columbia, SC cosmetic dentist.

By Dr. Adam Hahn|December 16th, 2015|Cosmetic Dentistry|Comments Off on Toothy Gift Options for the Superfan on Your List