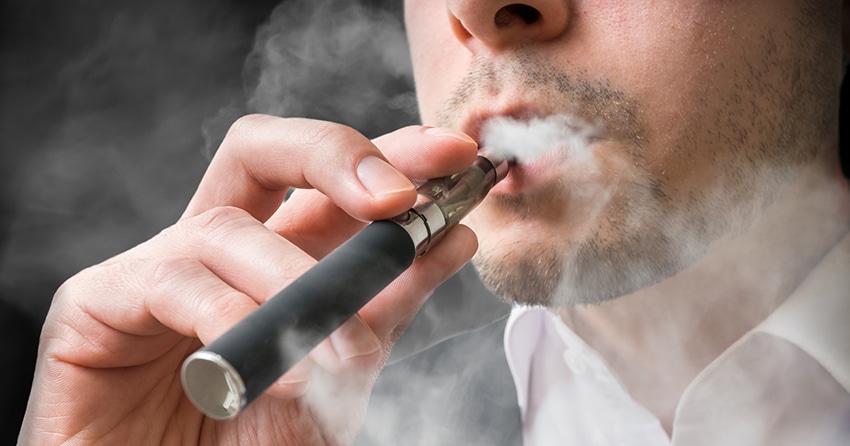 A few years ago, the word e-cigarette still sounded foreign to most people. But these days, smoking e-cigarettes — more casually known as “vaping” — has become unremarkable. In fact, recent statistics show that more than nine million Americans smoke e-cigarettes regularly, making them a trend worth investigating.

One of the main marketing tools used to sell e-cigarettes is the idea that they are a healthier alternative to cigarettes. But while the aerosol device may have eliminated some of the health risks that come from a traditional cigarette’s combustion-based delivery system, that doesn’t necessarily mean that e-cigarettes are healthy. In fact, recent studies show that the risks involved with vaping are still extremely high.

In one recent study from Université Laval in Quebec, researchers exposed gingival epithelial cells (gum cells) to the vapor from e-cigarettes. The vapor was pumped into the chamber holding the oral tissue cells at a rate intended to mimic the actual pace of smoking. This was done for fifteen minutes a day for three days.

Even in that short time span, there was a marked impact on the cells. In a control sample that is simply left alone, approximately 2% of the cells will die naturally. However, in the cells exposed to e-cigarette vapors, the numbers were significantly more pronounced. After just one day and fifteen minutes of vaping, 18% of the cells present had died. On day two, that number rose to 40%, and by day three, 53% of the cells had died.

This is extremely bad news for oral tissues. The epithelium is a defensive mechanism in your mouth, designed to prevent infection and inflammation. When it is compromised, the risk of gum disease is increased (which can lead to tooth loss and even bigger related health issues), and it may even increase the risk of cancer over the long term.

And the researchers in Quebec aren’t alone: Another recent study from the University of Rochester Medical Center had similarly unpleasant findings. Researchers there exposed human, non-smoker gum tissues to e-cigarette vapors and learned that the chemicals used to flavor the vapor plays a role in the risk. Those chemicals trigger cells to release proteins that cause inflammation, which is step one to exposing the mouth to a variety of oral diseases. Some flavors were worse than others, but overall, the presence of flavoring chemicals compounded the damage that was already being done by the other components of e-cigarette liquid.

Of course, these days, we all know that traditional cigarettes are extremely dangerous to both oral and overall health. But further research is needed to see if e-cigarettes are really much better. Until scientists have had the opportunity to further study e-cigarettes, your best bet to maintain your oral health is to stop smoking cigarettes entirely — regardless of the “e”!

Looking for a dentist in Columbia, South Carolina? Call (803) 781-9090 or contact us online to make an appointment.