Robot Dentists a Lot Closer Than We Thought

When we wrote about robot dentists a couple weeks ago, we had no idea that these were actually on the near horizon. But, it turns out,a small company in Florida has a dental implant robot going through the FDA approval process, according to a Miami Herald story. 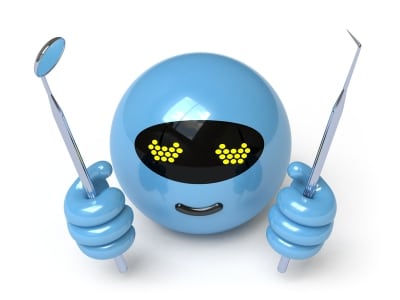 Neocis is a relatively young company, hiring its first employee in 2013. But it has received millions in funding from investors, and now has 10 or 11 employees. It also has what it says is a working first generation model of its dental implant robot.

Founders of the company began working on their idea in 2009, trying to build a working model in their garage out of scrap metal. The prototype was crude, but it was enough to start funding rolling.

The goal is that the entire procedure would be planned out beforehand based on imaging data and using custom software. The procedure would then be programmed into the computer and the robot would then guide the drill, the implant, or other tools to the precise spot indicated by the surgical plan. Cameras located on the robot would allow a dentist to monitor progress and alter the surgical plan on the fly if necessary.

Developers hope that their approach will reduce treatment time, improve accuracy of procedures, and potentially even reduce recovery and improve results with the use of minimally invasive techniques that the human hand might not be capable of mastering.

Still Not a Robot Brain

The good news is, this is not that much different from a surgical guide that’s used all the time by dentists all around the country. These surgical guides essentially help dentists ensure they are working in the exact spot designated by the surgical plan based on CT scans and other data. It’s a little bit different because, currently, it’s still a human hand holding the drill, but it’s not that far off.

We apparently still have more time before a true robot dentist appears, one capable of planning and performing a dental implant procedure on its own. So that’s a relief. Although the prospect of dentistry becoming more like playing a video game than practicing medicine is also a little disappointing.

If you are looking for an outstanding–and completely human--dentist in Columbia, SC, please call (803) 781-9090 for an appointment at Smile Columbia Dentistry.

By Dr. Adam Hahn|November 18th, 2015|Dental Implants, General Dentistry|Comments Off on Robot Dentists a Lot Closer Than We Thought