Even Cavemen Cleaned Their Teeth, with Toothpicks

It’s true that gum disease and tooth decay exploded in the industrial age when people suddenly had access to large amounts of refined sugars. But it didn’t begin there. Instead, people have always had oral disease as long as we’ve been people. This wasn’t an isolated problem. Although populations with widespread oral disease are rare, there were a number of specimens that show that even by the end of their relatively short lives (35 years on average), our ancestors had often lost many of their teeth and suffered from serious gum disease.

In particular, the latter problem was relatively serious and painful and led to the invention of the world’s first oral hygiene tool: the toothpick. 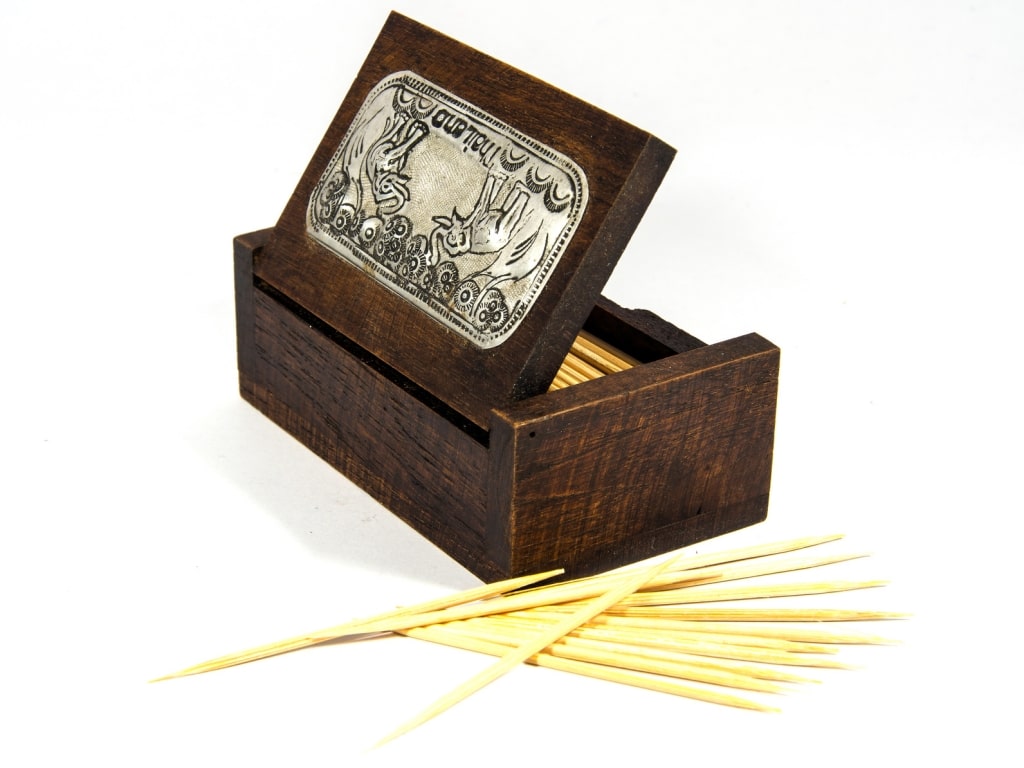 The truth is that, despite what paleo advocates will tell you, human beings aren’t really well adapted to eating meat. In particular, our teeth aren’t well designed for eating meat, and, as a result, it’s common to get meat stuck between our teeth. And when this occurs, a toothpick is your best remedy.

The problem is made even worse by super eruption. Because of all the coarse foods our ancestors ate, their teeth wore down and pushed higher, which exposed the narrower root of the tooth, making more space between teeth for meat to get stuck in.

The earliest evidence of toothpick use dates back 1.84 million years to a Homo erectus specimen from the Olduvai Gorge. It isn’t a toothpick itself, but wear on teeth consistent with using a toothpick regularly to remove debris from between the teeth.

Why Don’t We Find More Toothpicks?

Strangely, though, we don’t find any toothpicks among the remains left behind by H. erectus or other human species. Not until 5000 years ago in Sumerian burials do we find what we can definitely identify as toothpicks. Sumerian nobles were very conscientious about their appearance and wore a grooming kit around their neck that often included a toothpick, an ear spoon, and a pair of tweezers.

So where are all the million-year-old toothpicks? Probably decayed. It’s unlikely that toothpicks would be made of stone (think of scraping gravel up against your tooth–yeah, that’s not pleasant), so they wouldn’t be preserved as well as the stone scrapers and hand axes. Instead, they would be made of wood and bone, so we wouldn’t expect to find them until we find other wood and bone tools. We would expect to being finding them around 60,000 years ago, when bone sewing needles become common. But we don’t. Or maybe we do. It’s possible that bone sewing needles performed double duty, or that many of what we think are sewing needles are actually toothpicks, but have an eye so they can be worn around the neck, like the Sumerians did.

Is Your Diet Causing You Discomfort?

We speculate that the main reason why these early humans used toothpicks was to try to relieve pain from the foods stuck in their teeth. If you’re experiencing pain from the foods you eat, it’s time to seek help. We can identify the cause of your food-related discomfort and treat it to ensure that your smile remains healthy and comfortable.

To learn what’s causing your tooth pain, please call (803) 781-9090 for an appointment with a Columbia, SC dentist at Smile Columbia Dentistry today.

By Dr. Adam Hahn|September 9th, 2015|General Dentistry|Comments Off on Even Cavemen Cleaned Their Teeth, with Toothpicks

Our office will be closed November 23rd - 25th, December 22nd and December 26th, and January 2nd in observance of the holidays. We hope you and your families have a wonderful winter season! Happy Holidays! Please call (803) 781-9090 for any questions or to book an appointment. Ok
Go to Top