Can You Really Spot a Fake Smile?

Along with the usual cat videos circulating this week, there’s a short instructional video that claims it can teach you how to tell a genuine smile from a fake one (in under 60 seconds, no less!). Since we’re cosmetic dentists dedicated to ensuring that our smiles are indistinguishable from natural ones, we wanted to find out what their secret method was.

Watching the video, we found out that it actually has nothing to do with our work, but it is based on old science that has since been disproven. 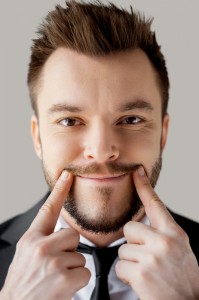 The video teaches you to look for Duchenne smiles. In the 19th century, French physiologist GBA Duchenne de Boulogne experimented with using electrodes to stimulate the action of muscles. He found he was able to make people smile by stimulating muscles in the cheeks, but there was something not quite right about the smiles. They seemed happy, sort of, but not really genuine.

He then observed what made the difference between his shock-induced smiles and those of people that were genuinely happy: the eyes. When we smile because we’re happy, we tend to use not just our cheek muscles that move the lips, but also the orbicularis oculi muscle, which crinkles the eye (incidentally, this is the muscle that causes crow’s feet). He postulated that genuines smiles included this muscle, but social or fake smiles did not, because, it was thought, the orbicularis oculi muscle couldn’t be consciously controlled (mostly because Duchenne and his buddies couldn’t do it).

Most People Can Fake Duchenne Smiles

You Can’t Spot a Fake Smile

In other words, although the eyes are certainly a worthwhile clue to look for, you can’t count on being able to tell the difference between a true smile and a false one.

You also can’t tell the difference between our cosmetic dentistry and a natural smile. If you would like to learn for yourself how close to nature our restorations can look, please call (803) 781-9090 for an appointment with a Columbia, SC cosmetic dentist at Smile Columbia Dentistry.

By Dr. Adam Hahn|September 17th, 2014|Cosmetic Dentistry|Comments Off on Can You Really Spot a Fake Smile?